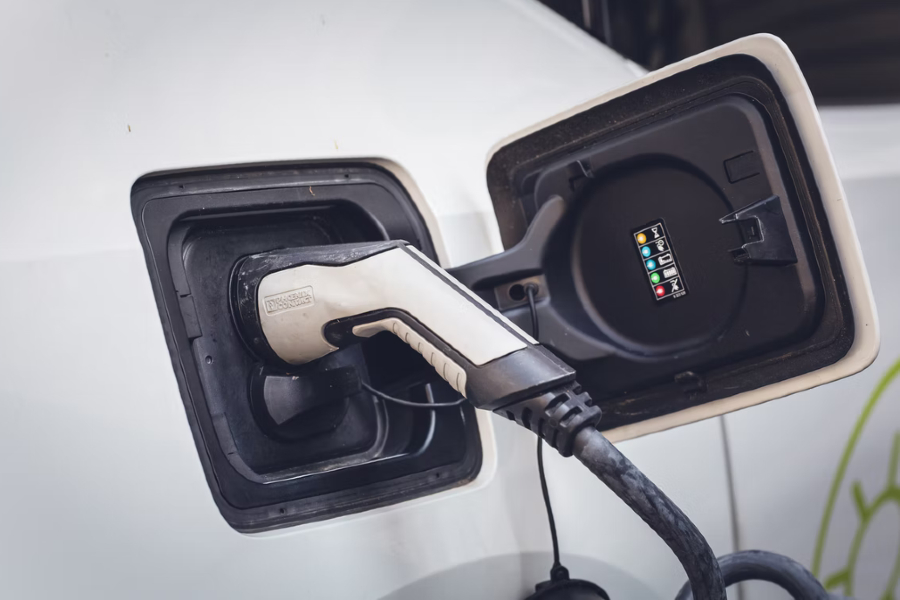 New research from Saga Insurance reveals which UK city is the most well equipped for electric vehicle drivers. With more than half of all vehicle sales forecast to be electric by 2040, the research explores which city is the best place to drive an EV.

A range of factors were analysed, including the availability of charging points, accessibility to off-street parking, cost of charging and clean air zones. Each city was scored per dataset to create a unique ranking and the research finds Greater London as the most electric-friendly city, followed by Newcastle Upon Tyne. 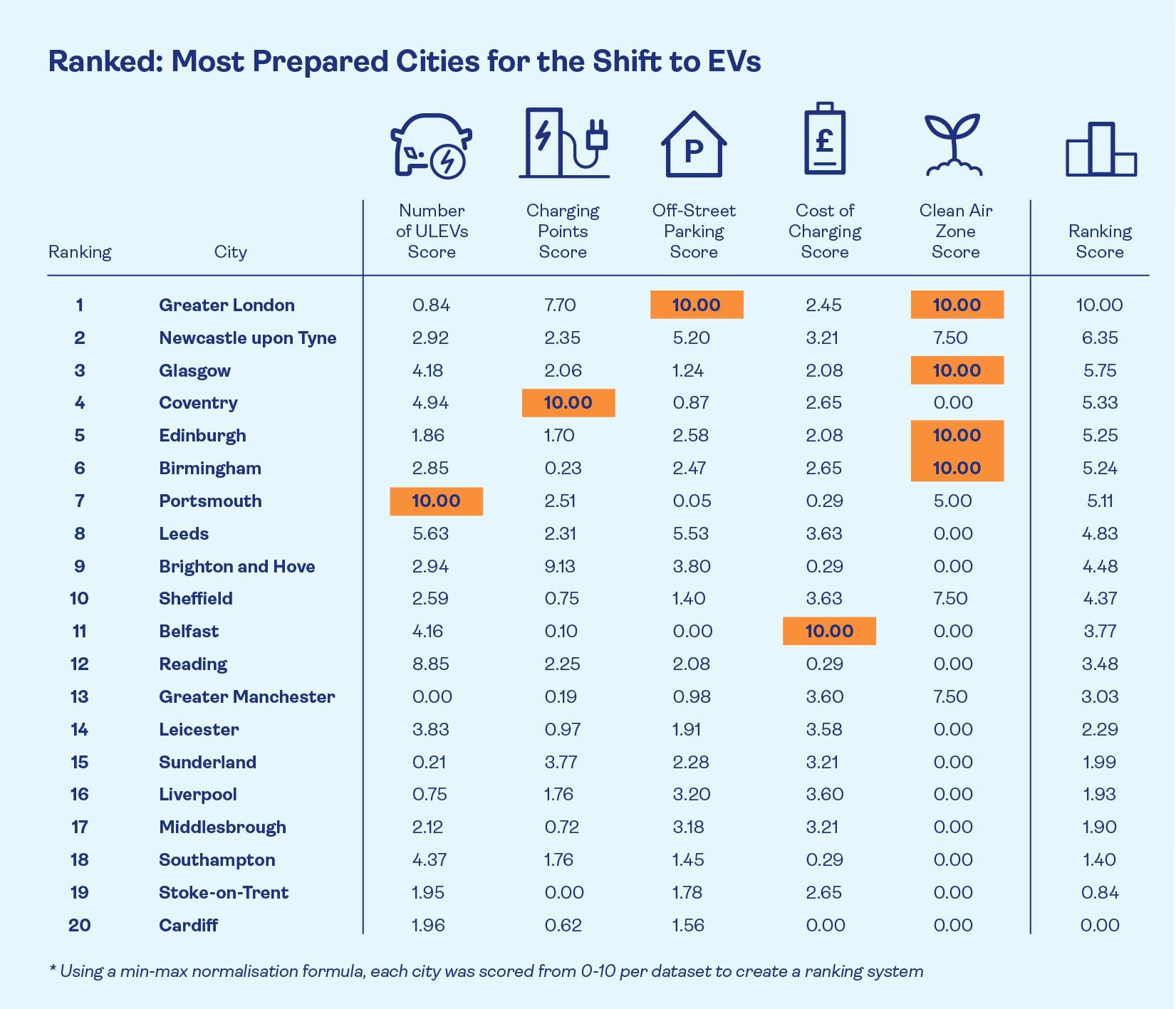 In the third quarter of 2021, the number of ultra-low emission vehicle (ULEV) registrations in the UK rose by 40% year-on-year. But what prompted this significant shift? Saga commissioned a survey to uncover public opinion towards electric vehicles, finding that most EV drivers are motivated particularly by environmental and financial reasons. The top reasons drivers switched to an electric vehicle were:

Financial motivations were prevalent among the oldest and youngest respondents polled – 44% of 16-24 year olds and 75% of over 55s ranked saving on fuel costs as their top reason for driving an EV. The survey also found that 60% of drivers think that charging an electric vehicle is less expensive than filling up a petrol/diesel car. In fact, the mean price difference estimated across all respondents was 5.58p per mile less. Among all other age groups, EVs being better for the environment came out as a top motivation to make the switch.

The survey found widespread enthusiasm towards electric cars. More than two-thirds (68%) of people said they’d consider switching to an electric vehicle (EV), including 72% of men and 65% of women. Of these, a quarter (25%) said they would definitely switch, and 39% expect to switch within 3-5 years’ time. There was also a clear appetite for switching amongst younger age groups, with 36% of 16–24-year-olds considering a switch in 1-2 years’ time.  Respondents in Greater London were the most likely to consider driving an EV (77%), but the interest is widespread with 26% of drivers saying they’d consider the number of electric charging points in an area as an important factor if they were planning a house move.

But where in the UK is the best place to own an electric car? Saga’s ranking reveals that Greater London is the most electric-friendly city, followed by Newcastle upon Tyne in second place. Two Scottish cities rank in the top five: Glasgow is the third best city for EVs, and Edinburgh follows behind in fifth place. Cardiff takes the bottom spot as the city least prepared for electrification. Cardiff fell below both Stoke-on-Trent (19th place) and Southampton (18th place) who also scored poorly.

For those who are still considering a switch to EV but haven’t yet committed, 55% of non-EV drivers said being able to save on fuel costs was their top reason considering the switch. This was closely followed by EVs being better for the environment, cited by 54% of respondents.

Despite this, non-EV drivers are facing a variety of barriers that are holding them back from making the switch. Almost three quarters (72%) were put off by the high upfront cost, citing the high expense of an electric car as the top reason they would not consider switching. This opinion was shared across all age groups, highest among those aged 55 and over at 76%.

Half of UK drivers say their city is ill-equipped for electric vehicle charging. The UK is currently adding around 7,600 public charge points annually, but a lack of both public and private charging points were identified as prevalent factors holding people back from switching to EVs.

Coventry currently has the best network of public charging points, giving it the fourth spot in the overall ranking, whereas Portsmouth is currently home to the highest number of ULEVs per capita, with more ULEVs registered in this city than any other. The cheapest city for public charging was Belfast, which fell just short of the top 10 as the 11th best city for EVs overall.

Electric vehicles have the potential to transform the places we live and work, and Saga’s investigation confirms that EVs are on the rise. Although the UK is making positive changes, more needs to be done to accommodate the electric revolution. The UK government has pledged £620m in EV grants and infrastructure, but by 2030 we will need more than 10 times the number of charge points than currently exist today.

“It’s great to see there’s a maintained appetite for electric vehicles, with 68% of UK drivers actively considering the switch. It’s also encouraging that our data finds 63% of over 55s specifically want to switch due to the positive environmental impact of EVs. However, even with clear benefits and increasing availability, there are some UK drivers who are hesitant. It seems a lack of education could be a major barrier to electric vehicle adoption, with 23% of UK drivers believing charging an EV is more expensive than filling a petrol or diesel car. It’s clear there’s a need to build awareness but most importantly to build and improve the UK’s public EV charging infrastructure.”

The full details of this research can be found here.

Original source: https://www.saga.co.uk/insurance/car-insurance/electric-cities
Disclaimer: This article was not originally written by a member of the GreenerHighways.co.uk team. 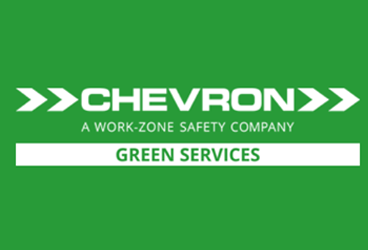 Previous articleData shows there are now almost 750,000 EVs on UK roads
Next articleMajor road and bridge upgrades to boost economic growth across the country

Kier trials electric van based on a standard London taxi